Do you know why they're called "argonauts"? Because the ship they're on is the Argo, which is named after the guy who built the ship, Argos. I never knew that until I watched it again today! 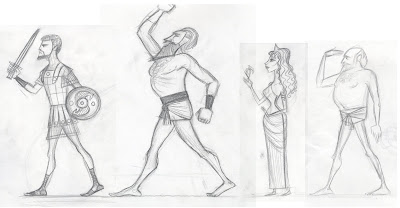 Medea was really hard to draw in profile. She's pretty, but she's got some crazy bone structure where it looks like her cheekbones are swollen, and her eyes are always kinda twitchy and vacant. But she's still one of my favorite characters in the movie anyway. She also wears the most unbearably inaccurate costumes...the Greeks didn't have corsets, and they didn't invent the wasp waist...but what the hell! It's the sixties! Everybody is shiny and orange and it's great.

Hercules' hand is missing because the paper ended. I'm constantly drawing too big for the surface that I've allowed myself. I'll add his hand later, with a giant broach pin in it. And just to prove that I'm not lazy, here's some sketches from the movie: 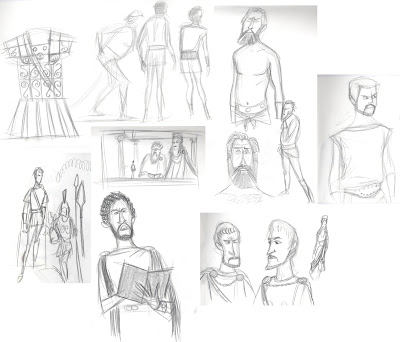 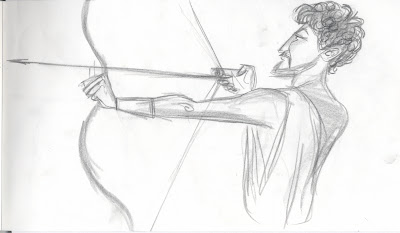 Yes, I'm starting to feel rather tense these days. Portfolio day is a very big day, and I don't want to jinx myself by saying this, but in my CalArts career I've never earned a single callback from it. It's not like my life depends on it or anything, but just the same, wish me luck.
Posted by brigette b at 10:49 PM
Email ThisBlogThis!Share to TwitterShare to FacebookShare to Pinterest

Cool sketches and wish you the best for the Portfolio!!! I'm sure everything will be great!

I like to call myself a TACONAUT... because they're delicous. Althought I'm not sure how one goes about navigating one.

Brigette, good luck! And if it makes you feel any better, I was rejected by CalArts the first time I applied and only got one call back (it was for Dilbert).

Now go do some more ARGONAUTS!!!!

Brigette , these are rad. Tottaly do more! I hope you kicked job fair in the balls, and I cant wait to see your film at the producer show tomorow night!!

Hi there Brigette,
Great stuff you got here, really, really nice - love the archer especially...are you going to post your film online after the producers show? I'm sure I'm not the only one wanting to see it!
I'll definitely be back for more!
take care,
-R.

There's so much beautiful work here...I've been drawing twice as hard since I found your blog. I love the indie kids...i love everything actually. Can't wait for more.