Little Update: Jason Anders posted his interview with yours truly on his blog, right here. If you're interested in hearing about what I did at Pixar or Disney or CalArts or what cartoons I like, then you should read it!

I realized that although I took a horrible photo of this painting several months ago (before I even went to Austria, which feels like a bajillion years ago) I never scanned it! It's been lingering above my desk for all this time. Now it gets the luv it deserves: 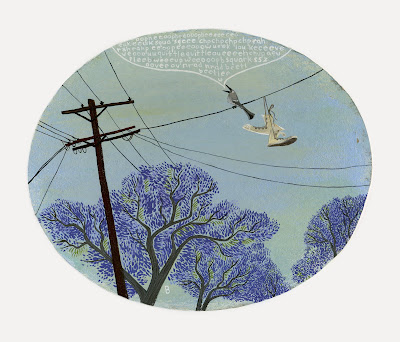 That's real for real paint: acrylic and gouache. I had to cut the cardboard into an oval shape to make it fit into its frame, and it is HARD to cut cardboard into a circular shape of any kind, let me tell you. I've thought about putting in the shop, but I'm hesitating. It's kind of a personal work.

Also, here is a coyote and a crow having a tea party. They are eating rabbit sandwiches with fancy mustard: 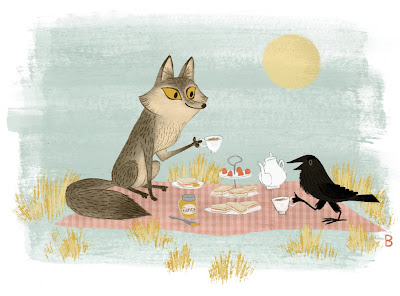 This one is digital, all photoshop. There are prints of this in the old shop right now!

In more personal newses, it's me and Sean's 5 year anniversary today! Huzzah! I can't believe it's been that long. It doesn't feel like it. We're going to see "Nightmare Before Christmas" at the El Capitan here in ridiculous, hot as heck Los Angeles because that's what we did on our first date: we saw Nightmare at the El Capitan. Here's a little pic of us in the Mirabell Gardens in Salzburg, Austria. Sean looks grumpy because he couldn't get his cigarette lit. I have a series of photos of him after this where he is just standing about in the background of each photo trying to get the stupid thing combusted. Court has some amazing pics of us arguing in Vienna and I WISH I could show you those, because this picture is so nicey-nice, it doesn't really tell you anything about us except that we both look alright. 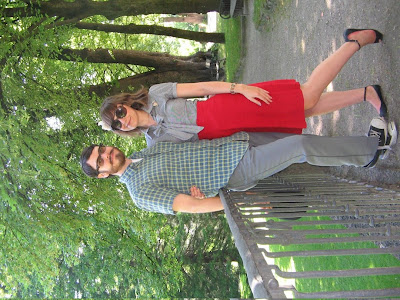 One more thing! I started a flickr! So if you flickr and I flickr, then we should be flickr friends. You can peruse my artwork and photos and stuff, too, and look at more pics of my stupid face if you want.
Posted by brigette b at 7:01 PM
Email ThisBlogThis!Share to TwitterShare to FacebookShare to Pinterest
Labels: acrylic, converse, coyote, crow, gouache, interview, mockingbird, painting, photoshop, rabbit, sandwich, tea party, telephone pole

I certainly hope you do a graphic novel and some childrens books in the future, cause that'd be ridiculously Rad!!!!

Ahoy hoy! just stumbled across your blog. i love your Canis lupus characters! I'm off to check out your flickr account!