I don't have a lot of pretty shiny colored work to show this week, but I don't really think anybody does. You know why? Because THANKSGIVING! That's why! Everyone is too distracted by pies and dealing with their own crazy families to be looking at blogs, or drawing pretty stuff, or posting fancy paintings. But because I promised myself I'd keep it up, I gotta get my two posts in this week, and here's one of them. These are all sketches which are really plans for paintings, and they'll be paintings very soon. Sorry they're so messy and incomprehensible.

First of all, a triptych with these three lovely girls. If you can guess who they are I'll give you one hundred points. 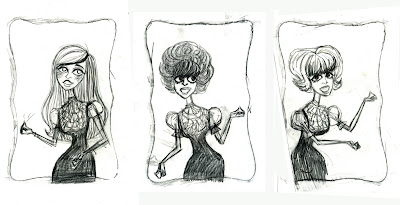 And some little foxes... 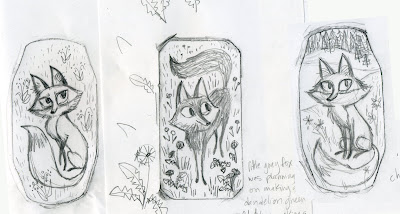 And this girl and guy, who are cut into slices like that for a reason, I swear! It'll make sense when it's done. They're shy. 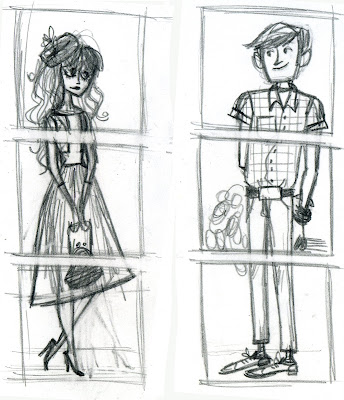 And now, my Thanksgiving weekend movie picks! Stuff to watch while you are recovering from a day of eating till you almost explode, and then eating some more!

Charade: The 60's, Givenchy clothes, Audrey Hepburn, Cary Grant, Paris, Saul Bass titles...it's like they made a movie just for me. It's not fantastic, but it's highly watchable and very stylish. It's light hearted in nature for a mystery/thriller too, so it won't upset your tummy by making you all tense.

Nightmare Before Christmas: In kid logic, this is the perfect Thanksgiving movie because just like Thanksgiving, it takes place between two vastly more important holidays: Halloween and Christmas.

Better Off Dead: It kind of takes place at Christmas time, well some of it anyway. I know I've blabbed about it before but if your sense of humor is anywhere near similar to mine, you'll probably fall in love with it. It has a very young John Cusack, exploding faces, dancing hamburgers, skiing, Barney Rubble, aardvark suits, raisins, and all those other things that make a film great.

The Sound of Music: YEAH. So I love The Sound of Music! Yes it's a story about a nun, in Austria, and they sing on mountains while riding bikes. It's great. If you can't at least appreciate the wonderous filmmaking in this movie, apart from all the singing and nunnery, then I think your soul may be a little broken. It's just beautiful to look at.

Smokey Mountain Christmas: Although technically a made for TV movie, this one really makes or breaks the holiday season for me. They used to play it every year on USA, channel 7, at least a hundred times between October and January. It has, hold your breath, Dolly Parton as a country singer who returns to the log cabin of her youth to find some X-mas spirit. There's orphans in it! It's undeniably hokey, and there's singing in it, but me and my little sis eat it up every year. So ridiculous it's good.

Three Caballeros: It doesn't go anywhere, and it doesn't have to. I think most of the time is spent watching Donald Duck chase women and have strangely psychodelic visions of cacti and flora, but it's so beautifully art directed, who cares? And how can you beat lyrics like "Three happy chappies in snappy serapes"? You can't.

I will probably watch all of these this weekend, after I eat my Tofurky and homemade cranberry sauce. Have nice holidays everybody!
Posted by brigette b at 9:52 PM
Email ThisBlogThis!Share to TwitterShare to FacebookShare to Pinterest
Labels: 60's, doodles, drawing, films, fox, girls, holidays, movies, sketches, thanksgiving

How I love your sketches... And how I adore your foxes!!!! Seriously, if you're making some paints with them, I think I will go mental. Thank you so much, you made my day today!

my sister and i have similar squee-fests over smoky mountain christmas! i so wish they'd release it on dvd.

Wow I love your drawings!

I seriously melt every time i see your art. it is so amazing and outstanding.and most of all inspiring.

Brilliant sketches!
I do love the shy couple very much they are so sweet and he has some rather dapper shoes! cant wait to see them painted ^_^

i just can't figure out who those 3 ladies are. i feel like i should know this. love the shy couple. I made one similar to that except it's two boys. I'll post it up soon.

jen o: I bought it on DVD from a website that sells mad for TV movies and specials. I'm sure it's violating like 100 laws but don't hesitate to google it!

jonathan: Don't worry, I'll reveal their identities on Saturday if nobody guesses by then.

I followed a flickr link here...and I have to agree, those are some pretty great movie choices, especially for Thanksgiving.
I love the shy girl and guy.

I don't know who the girls are, but they must be very pretty. Maybe they are only famous in the usa. I don't know

Better of Dead is a monumentally favorite movie of mine. I've watched it multiple times in a row. "Gee Ricky, sorry your Mom blew up.."
gets me every time.

Really like the new stuff, can't wait to see what direction you take them in. Your foxes make me smile

to die for...i want to run up and hug all of your paintings,sketches etc etc...again.

Why, those are the Shangri-Las! My favorite girl group, ever! And also the inspiration for lots of my crafts too! Can't wait to see the final paintings... oh and happy thanksgiving!

miss daily craft: Oooh!! You guessed it! But of course you would know.

ahh! I love your foxes! They have so much expression!