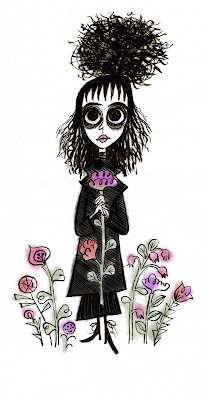 Beetlejuice is one of the movies that was in heavy rotation in the VCR when I was a kid. I'm pretty sure I didn't understand most of what was going on, as is the case with most movies watched in childhood. There's so much cool looking stuff in the movie though, you kinda don't need to 'get it' to appreciate it. 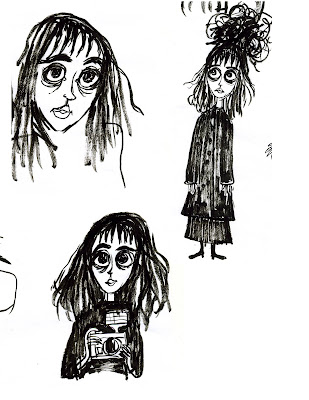 Winona doesn't look too great in the movie, actually. I know she's supposed to look all death-y but she really does. I actually cut my bangs like Lydia's when I was a teenager, all pointy...bold!

I love Catherine O'Hara. She's one of the few actresses that I think I'd really truly freak out about if I were to run into her in person. She's perfectly insane in the movie. I got a pretty decent Gina Davis over there, too. 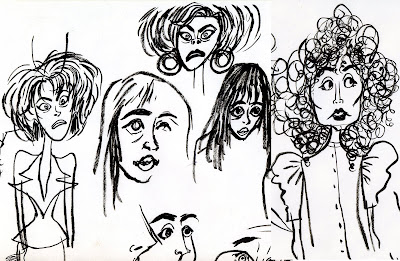 I was a big fan of the Beetlejuice cartoon, too, even though it has barely anything in common with the movie. By the way, don't even bother google image searching the cartoon unless you want to see a LOT of fan art with the potential to hurt your feelings. Learn from my mistake.

...and then I watched Ghost Hunters! 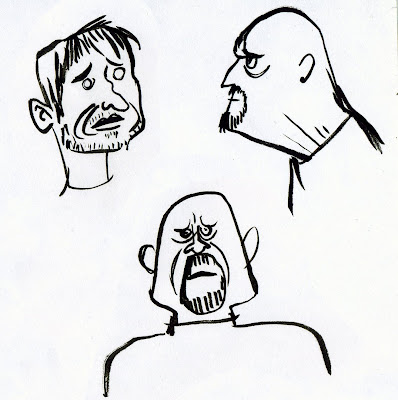 Posted by brigette b at 1:27 PM
Email ThisBlogThis!Share to TwitterShare to FacebookShare to Pinterest

Love your sketches...and btw I knew right away it was Jay and Grant. LOL.

these are so pretty! I remember watching Beetlejuice when I was younger and secretly saying it 3 times but then i'd chicken out and never made it to 3 :)

Fabulous illustrations; I love how you draw Lydia! And Catherine O'Hara is indeed amazing.

Lydia looks great!
Phe adventures of pete and pete was one of my favourite tv shows on nickelodeon:)

Catherine O'hara is amazing! You should look up her work on SCTV if you ever get a chance.

Awesome Sketches and Awesome movie! I love your drawings. Catherine O'Hara was my favorite in the film. I'd love to see an animated version of the dinner dance scene in your style.

Aw! I was Lydia last year, but cartoon version. I was too cheap to go movie version. LOVE those sketches, they're so full of lovely lines and wonderful expressions :)

Fantastic stuff all around! And great to see you posting again!

What kind of brush pen do you use?