My book Twelve Dancing Princesses is out this week, officially, in the world, for you to buy, and love and cherish! 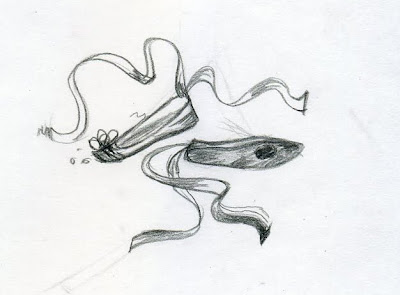 So I thought I'd go back in time to when the book wasn't finished, to when it was barely just started, because it didn't just materialize out of thin air and Photoshop. Like most big projects, it developed in phases and rather slowly. There was lots of sketching and doodling and revising and things that didn't really look like anything that I'm surprised my editor could even understand!

Let's start at the beginning, when I chose what era I ought to place this far away kingdom in. I did NOT want to just do whatever-fantasy-far-far-away-princess-royalty-mashup. I love fashion history, and costumes, so I had to be specific. I liked the idea of doing an 18th century Mary Antoinette fanciful French style, but that has been done, and very beautifully, and one of my own favorite illustrators Kay Nielson, and I can't front Kay. I chose the 1830's-40's, because the kings were dapper, the ladies had big fantastic hoop dresses, and the shoes were appropriately similar to ballet slippers! 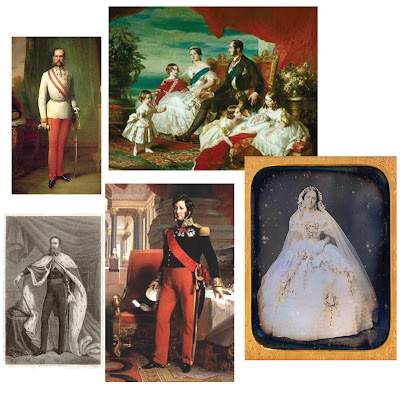 I love how GIANT the dresses in that era were! Can you imagine wearing something that big? Everyday? Fitting through doorways in it? Going to the bathroom in it?? I did a few very rough and tumble character designs, for proportion and stuff. All twelve princesses are basically the same princess with different hair and dresses. To design and re-draw and remember all the puny details of twelve separate princesses sounded very not fun to me. It was challenging enough just fitting all twelve into each composition! 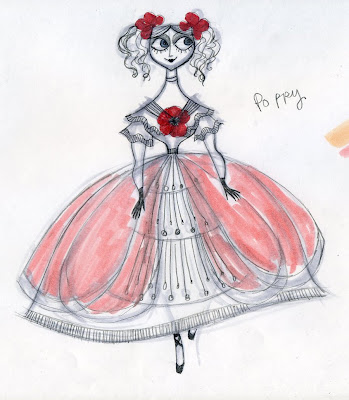 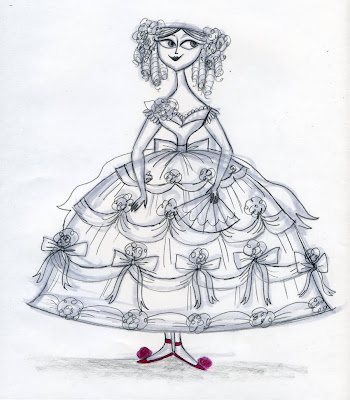 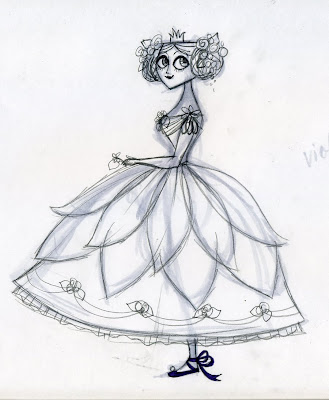 Since the story was already written and given the a-okay by my editor, I moved along to thumbnail sketches. They are very rough, and very small: I drew them on 1"x1.5" post-it notes. I did that so that I could doodle a composition and then if I didn't care for it immediately peel it away and draw another one. I went through an enormous stack of tiny post-it's in such a way. The compositions changed very little from what you see here. 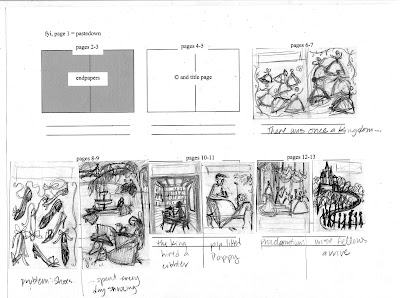 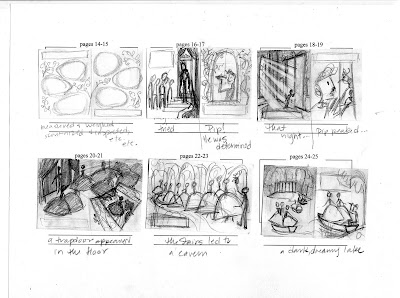 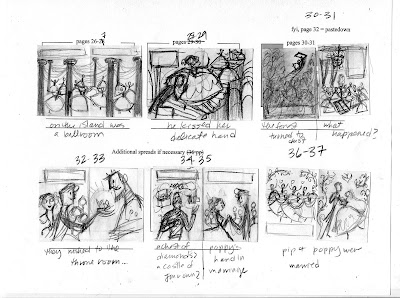 This is the whole book in post-its!

I did all the final illustrations in Photoshop. I had to BUY Photoshop, because I had previously had only bootlegged versions of it (from being a student and to be fair, no student can afford that schnazz), and it kept crashing and asking me for serial numbers, and finally just wouldn't open at all. SOOOO expensive, but worth it in the end for a version that actually WORKS. It was a serious crisis for me for about 3 days, back when I was just beginning to work on the final art. 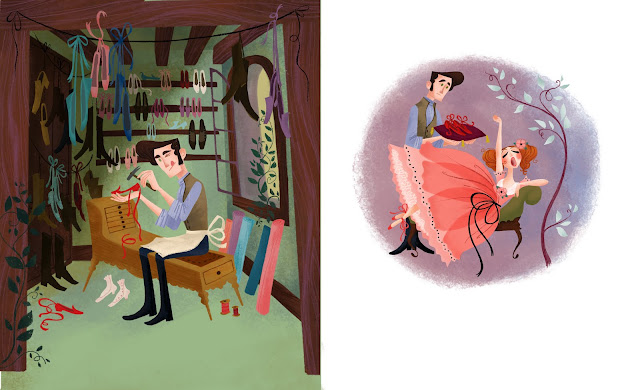 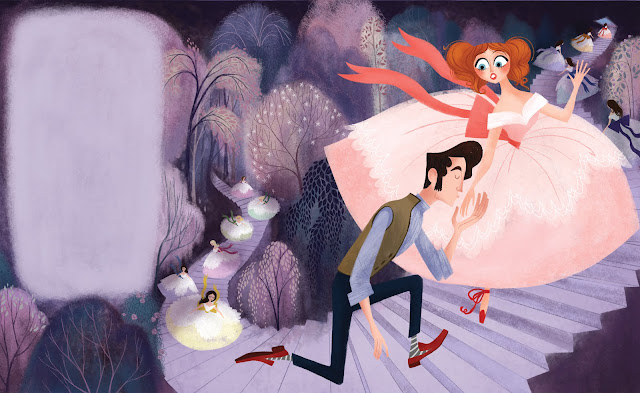 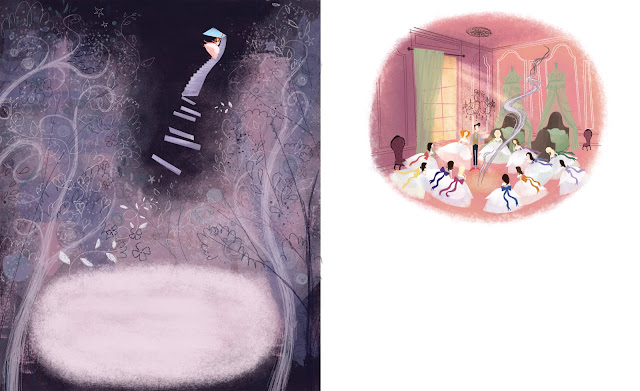 Yes there's like 100 layers, and they are all labeled appropriately. Virgo style.

What I take away from making this book is basically this: I really love making books. I'm beginning work on a new one...but that's for later!
Posted by brigette b at 3:39 PM
Email ThisBlogThis!Share to TwitterShare to FacebookShare to Pinterest
Labels: 12 dancing princesses, 1830's, brigette b, brigette barrager, costume, doodles, drawings, history, paintings, photoshop, princesses, purpl, sketches, twelve dancing princesses

I am so excited to finally see it in person! Can't wait to get my hands on a copy. It looks like it will be fantastic! Congrats. ;)

Brigette!!! Its so cool!! I love seeing your process!

I just picked up your book at diesel bookstore! Absolutely beautiful!

Congrats on finishing your book. I really enjoyed seeing your process work.

WOW! It looks magical! Congrats to you!

Looks amazing! This was always one of my favorite stories when I was a kid.

Oh wow Brigette so beautiful!
You definitely have an eye for detail!!!
Congratulations!
I will be on the look out here up north for this fine find!

Thanks for the fantastic insight into your process

These images are lovely, looking forward to seeing the final product. Did you see any of the Royal Wedding? Not so much for the women, but all the men were dressed in ery daper uniforms! You might like it!

It is stunning Brigette ! I'll definitely get a copy ♥

AHHHH, how exciting! I need to get my hands on this the next time I'm out!

You are brilliant. Loving seeing your process as always. The final images are gorgeous.

The illustrations are absolutely gorgeous! A fantastic job!

Post it note, interesting medium to say the least.

I find especially the underground garden/ forest very beautiful, colorwise and also the graphical style of the trees.

The book really looks stunning, Brigette! No doubt it will be the first of many.

Wow Brigette, this looks gorgeous, can't wait to get it!

Thank you for sharing all your awesomeness with the world! I found this post to be very inspiring & just beautiful. You go Girl :O)

your art is really cool!

Brigette, I just picked up a copy of your book at a book fair last week. This was one of my favorite stories as a child and I picked up your version for my 4 year old daughter.

We have both fallen completely in love with it. There is no other book now--we must read your book every night!

Your illustrations are completely magical. We love looking at the dresses and shoes and find Poppy to be a most intriguing princess.

I just googled your name and discovered your blog--so now I am following. :) I write a children's book blog www.sillyeaglebooks.com and will be writing a post about our new favorite princess book soon. I'll send you the link when I do.

I'm a huge fan and so is my daughter--just wanted to let you know and thank you again for such a beautiful book! Can't wait to see what you do next.

This is adorable! Want to buy.

I absolutely LOVE this edition. K.Y. Craft's illustrated version was one of my favorites as a child. I remember I'd just sit and stare and get lost in the illustrations, which is probably why I didn't realize how LONG the text actually was until reconnected with it years and years later as a bookseller. This edition got the length and pacing to a place that parents (and other gift givers) aren't frightened by and the illustrations are beyond gorgeous. I pretty much swooned when I first read it. As a former bookseller that did a sad stint as a Barnes & Noble employee, they were always putting together mostly crap displays for their "theme wall" -- a wall that at one point featured new, worthwhile releases and now is just home to whatever junk they're pushing at the moment. Not too long ago they did one such "pirates and princesses" theme full of pink fluff that nobody wanted to actually buy. Despite the plethora of princess stories we already had, I ordered in copies of your Twelve Dancing Princesses as a staff recommendation/example of the princess genre done well and they, of course, sold immediately. ....which is my very roundabout way of saying I love what you've done in this book and so do other people with eyeballs. Enjoying your blog as well and looking forward to whatever comes next :)

I first stumbled upon your old etsy account years ago and fell instantly in love with your art, which reminds me of my mother's old fairytale books from the 60s. My husband gave me a print of yours--a tattooed lady from a circus series--for Christmas that year, and it remains one of the best gifts I ever received. Unfortunately, we could not afford to purchase anything else before your shop closed.

Life carried on, as it will, and I sort of became negligent in visiting your blog. Until today, when I had a "whatever happened to Brigette B?" moment. I can't describe what I felt when I discovered that you had released a book of your own without sounding like a complete nutjob, but I was just overjoyed! Not only am I excited to experience the story and lovely artwork for myself, but I can't wait to share it with my two daughters. My older daughter, 6, lives and breathes art and is considered quite talented by her teachers. Your book will be THE perfect present for her upcoming birthday. I just know she'll be absolutely thrilled.

Congrats on your success!