This is my piece for the Book Show!

It's based on the Flavia de Luce novels, specifically The Sweetness at the Bottom of the Pie.  I like the part when she melts down her sister's lipstick and infuses it with poison ivy.   Oh Flav, you vengeful little creature. 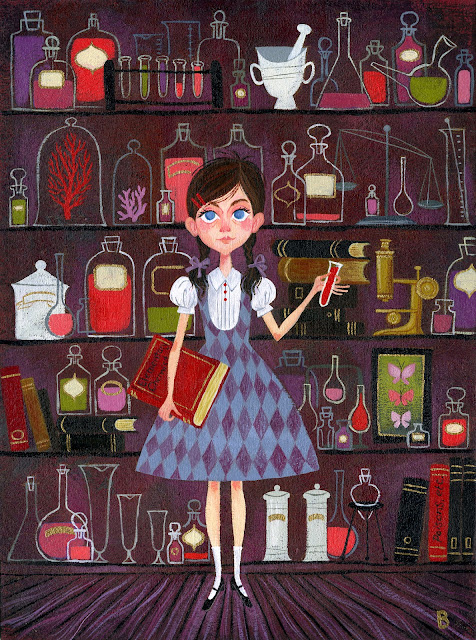 For those of you who haven't read the book (or books...there are 4 total with another one on the way and I've read em all wooooo!)  Flavia is a really interesting gal, not just because she's an 11 year old chemistry whiz/girl detective/British aristocrat/lives in the 50's, but because there are so many contradictions in her character.  Her mother died when she was a baby, so she doesn't remember her, yet she is obsessed with her.  She wonders why her sister's don't like her yet she goes out of her way to terrorize them constantly.  She's scary smart and sneaky and yet monumentally naive.  She's kinda bitchy and manipulative but supes vulnerable at the same time.  I love her and hate her alternately when I read the books...she's all complex!

She lives in a big old rotting English country house, where she has taken the Victorian-era chemistry lab as her own.  I wanted to show her in her natural habitat, among the chemicals and books.  The story takes place in the 50's, but the lab is totally old school and kinda mad-scientist-y.  At least that's how I picture it.

She talks about chemistry a lot in the book(s). I tried to take chemistry, but bounced out of the class when I realized that I had no idea what the &$%# was happening and had no hope of catching up (it was a city college class, so you could kinda do that).  Flavia certainly makes it interesting, compelling even, but I was so completely lost in that class.  Much like John Cusack in this particular movie clip!

awesome!!!! Wow! I love Flavia de Luce and I love your Illustrations! Great!!!!

Love the paintings, especially the more abstract ones. Unfortunately I've got no spare pennies to buy one,
but I'm sure you'll have no problem, they're awesome.
Paintings for Sale

oh! i love this series too! will you ever sell a print of this???