To start out with, here's what my little plot in the char anim show looked like. Those elaborate, beautiful golden flowery branches are from my Oma's house. She doesn't know I stole them. Don't tell her! It's sideways, sorry. Oops. 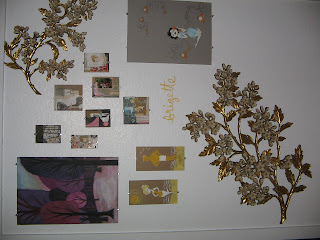 So, it's been a while. I always start to feel guilty when I don't post often as I can. I don't have a whole lot to show though, because I've been hammering away at old Scratchy Beard (the film) all week! Here are some sketches which have been dolled up with photoshop, because color always illicits a more emotional reaction.

Stewardesses from my sketchbook... 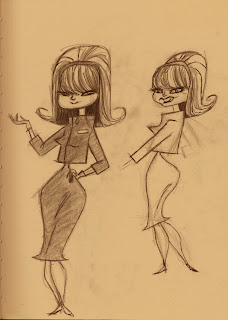 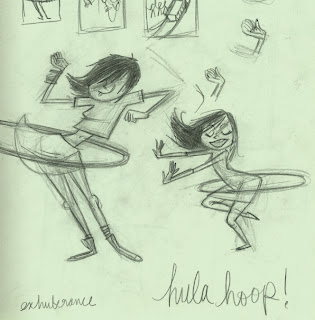 This hula hoop drawing was meant to become a painting but it never made it, cause I ran out of time. Someday! It was going to be part of a triptych, which is fancy artist speak for three paintings hung up next to each other. The other two were going to be "loop de loop" and "chupa chup", like the delicious sucker. 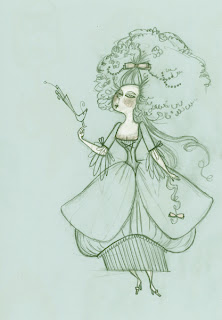 I love historical costume...and screwing around in photoshop late at night. I wanted to give her a full color treatment buuuutt...it's late and I'm sleepy!

I think I need to draw boys more. My inclination is always towards drawing girls, since I grew up thinking boys were gross and stupid and that girls are pretty and nice. I think guys have an equally difficult time drawing girls, since they spend their childhoods trying to draw every muscle on He-man or whatever. Okay. I'll try to draw more dudes. Maybe the next post will be guy-drawings only.

That's all for now, folks. I'm taking the day off tomorrow. I'm pooped.
Posted by brigette b at 12:26 AM
Email ThisBlogThis!Share to TwitterShare to FacebookShare to Pinterest
Labels: doodles

Brigette!
This are just ... ADORABLE!
I love the stewardess!!!! she's so cute!
Nice shapes too!

Hey Brigette! I really like your designs! really appealing and charming! haha...that's a really funny way to link me to your list!

Your work is NICE!

I really like that hola hoop drawing... can i... have it?