I promised myself I would update at least twice a week.

Who wants to go to a blog that's all stale? No one. I'm determined to keep updating at least twice a week, although last week I didn't do so good. I thought about updating several times, but it just didn't happen. I'm going to try harder this week! It's only Monday, there's still time!


Here are some designs that I did a while ago for a commercial that didn't get used. The ad was about cell phones and stuff, which is why all these guys have phones. 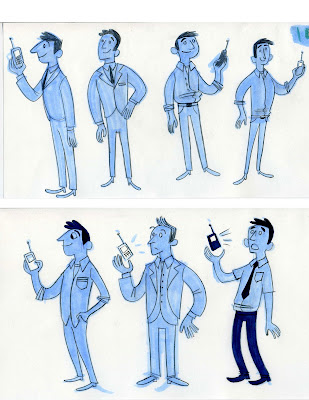 And here are some children who could have accompanied Mr. Cell Phone. 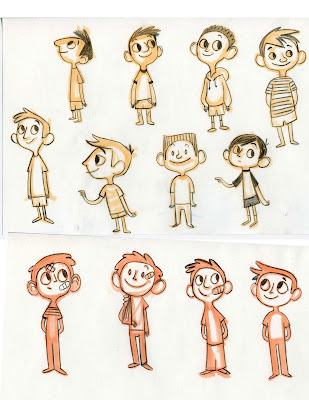 Meanwhile, here's what I've been up to:

-painting backgrounds for the Swarovski project
-handing out my business cards!
-getting ready for sweater weather and enjoying how much cooler it's been in Los Angeles these days (at least in the morning)
-sketching up ideas for APE like a crazy lady
-reading 2 books at once (not as confusing as it sounds)
-drinking lots and lots of tea
-setting up a flickr account
-preparing for a vacation get-away weekend real soon!


Well, at least I'm not boring.

By the by: I've turned comment moderation on for the time being. I guess someone thought it would be a real fun thing to come to my blog and anonymously sass me, but I don't think that's cool. Nobody wants to read somebody else's out and out rudeness, even if it's not directed toward them. So for your sake, dear blog reader, and for my own, you will have to have an ID of some kind to post a comment AND your comment will be moderated. For most of you that's no big deal, but for people who for some reason think I'm stupider than a head of lettuce and everybody else should have to read your opinion about that: tooooooo bad.
Posted by brigette b at 11:02 AM
Email ThisBlogThis!Share to TwitterShare to FacebookShare to Pinterest
Labels: commercial, doodles, kids, marker, phone, sketches

I always have the best intentions of updating too, but if I don't have a photo to type about it doesn't happen. best of luck! and I am certain you are smarter than a head of lettuce! :)

hey hon! I love the cell phone peeps, the bad ass driving coyote and the kitty on the business cards!

yay. very nice. very nice indeed... yeah, i can't wait for it to get even cooler down here. my room makes me sweat it's so hot, even with the windows open. so sad for phil.