I finished the dog face man too, so it only seemed fair to put him and her in the same post together so you can see them side by side. 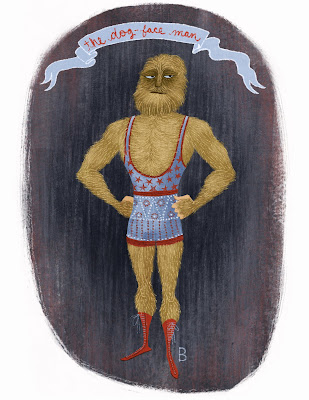 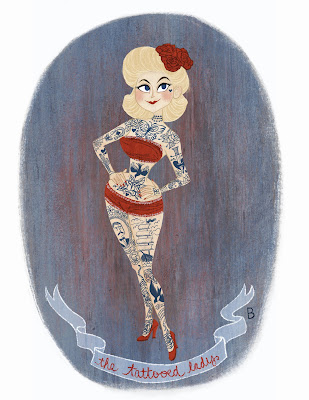 Also, I had some buttons made! Here they are sitting in their little button box. They have to wait until APE to be set free into the world. I'm planning on giving one away to anybody who stops by my little table to say "Hey, I've seen your blog before" or "Don't you have an etsy store or something?" So if you're going to APE, come by and claim your button! 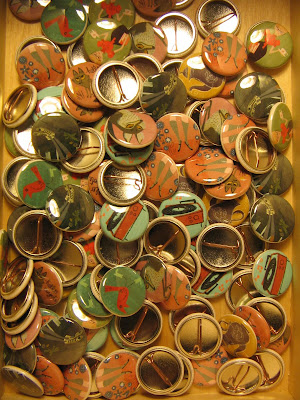 Here's a closer look at the actual designs on the buttons...some are little tid bits of paintings, and some I just made up cause I thought they'd look cool on a button. Sean is a fan of the close-up coyote face from the coyote car painting, but my favorite is the little baby coyote on the pink ground. I love how it says "hello coyote", like you're saying hi to the little guy every time you read it. He looks so smug hanging out there, sniffing the flowers. Do you have a favorite?

I've got to give myself a little pat on the back, cause I've totally been updating twice a week for like, six weeks! That's lots of weeks, in blog time. ALSO! I put a little counter at the bottom of my page about a week and half ago...I think it was Monday? Just out of curiosity, to see how many folks clicked past the old blog. I was pretty sure it was a ghost town, since I don't get like a bazillion comments on each post, but man, was I ever surprised! In a little under two weeks I've got almost 2000 views! That's a LOT more than I thought! So thanks to all you silent blog viewers who pass through and look but keep your two cents to yourself...it's nice to know that you're there, and that I'm not just typing away like a moron into the ether.


Halloween is sooo close! If you're in LA, you should go watch Carrie in the Cemetery!
Posted by brigette b at 7:51 PM
Email ThisBlogThis!Share to TwitterShare to FacebookShare to Pinterest
Labels: alternative press expo, buttons, circus, coyote, dog face man, halloween, painting, photoshop, sideshow, tattooed lady

...I just wanted to say that I love your artwork!

I like everything about that Dog Faced Man piece. And my fav button is the red bird in galoshes.

Cool buttons! If you have any leftover after the event, I would love to get one.

Pumml, I like the bird too. I don't know what it is about a bird in boots...the image just makes me happy!

holy smokes your art is mind blowing! You capture chacacter sooo well...oddly well.....you must be a witch!! burn the WITCH!!
haha jks (but awesome art man)

I was waiting for this guy. Wonderful once again.

Dog face man is brilliant. I don't want to be repetitive but I think you have bumped into a really original carachter, kind of for example belle and the beast, but in a sense not so childish...
I think that he's demanding a story of his own

I want a button! Pleeeease, save me just one little button.

Spectacular! Kudos to productivity. Yeah, your blog is certainly not a ghost town. It's a booming metropolis!

aw brigette, those are great
and the buttons! they are so cute! I love them all, but I think if I had to pick a favourite I'd pick the hello coyote one too. I wish I could go there just to claim a button. hehe

Just Lovely! I think I like the bird in boots the most, but they're all really Great!

i love the red bird in rainboots. the record player is cute too.
yay for circus freaks! that was the theme of my grad show back in april, I was the poodle trainer. Will there be more?? It would make a fantastic series of paintings!

food and drugs: These two imply a lot of story for reason...I hadn't thought of it in terms of Beauty and the Beast but that's a pretty neat-o idea.

jonathan: I think I'll definitely do a couple more. I was thinking of doing a bearded lady, a tiny couple, and a pair of albino twins. I'd love a strong man too. Obviously, I could easily get carried away with the circus theme!

Will you be selling buttons on your etsy site?

Becky: I think that due to popular demand, I will be selling them on my site soon! I didn't know they were going to be such a hit, or I would have already put some in there.