I don't think I've ever mentioned this before, but my grandfather on my dad's side was an artist. He worked for a company called Josten's that made class rings and diplomas and such in Owatanna, Minnesota, for several years. Like any good artist, he made a new Christmas card every year (a tradition that I have yet to catch on to...maybe when I have some dogs or babies to show off I'll get into it). Last November when I was in San Francisco for APE my uncle handed me a big, fat stack of those Christmas cards. It seems that the responsibility of cataloging and sorting through and sharing-with-the-rest-of-the-world of grampa's work has come to rest on my shoulders, so here's a few cards that I liked the best. It's their internet premiere, and probably the first time anyone besides family has seen them in many, many years... 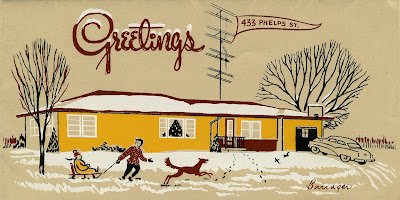 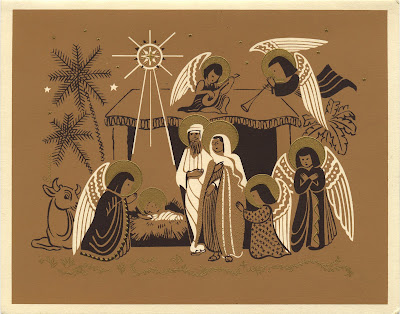 There's more of these guys on my flickr. I finally broke down and got myself a flickr pro (200 images is really not that many). Merry X-mas to me!

I never knew grampa that well as he died when I was only seven, and he wasn't around much before that. I do remember him sleeping on the couch in our living room with the TV on and wondering if he would wake up if I changed the channel to cartoons... 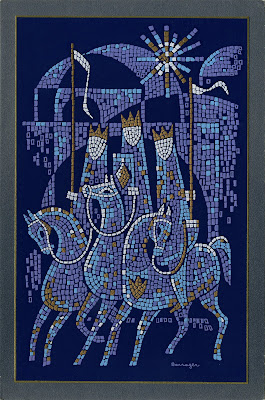 What do you think? Did I inherit any of my skillz from this guy? 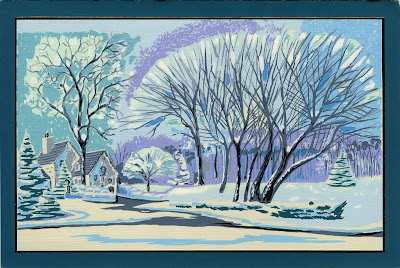 Also, I'm taking a Winter Break from my blogging responsibilities. Don't be sad, I'll be back after Christmas! I've just got so much seasonal stuff to do: bake vegan goodies, watch like 1000 hours of TV, and go to Bahooka for my yearly Hawaiian Christmas fix. I know Christmas + Hawaii probably doesn't make sense to you, but if you go to Bahooka and check it out this time of year you won't regret it. Me and Sean have made it a holiday tradition. We're going to take our dogs or babies there with us when we have some! I'm spending Christmas by the seaside this year in my hometown, and although it is without fail a green Christmas every year, we may actually have rain, which sounds just utterly cozy to me. Hopefully when I return from my break I'll be recharged and fat and rested and ready to take on some smashing New Year's parties.

Here's wishing you a Merry Christmas! See you later!
Posted by brigette b at 12:01 AM
Email ThisBlogThis!Share to TwitterShare to FacebookShare to Pinterest
Labels: cards, christmas, grampa, seasonal, snow, vintage, winter

Cool! He was great, I like his color pallets. My favorite card is the one all done in squares.

My grandma worked for Jostens too.

yes yes I heard of jostens! I love the cards, its nice to know where artists got their artistry from in the fam.
Have a happy Christ.mas!

merry christmas!!!!! did you get my card?

Great illustrations, my favorite is the first one, I love its design and the letters.

I love your work in violets!

Talented family! Thanks for sharing these lovely x-mas cards.

Love these!!! Your grandpa is awesome! Love his cards! especially the first one and the last, blue one. Oh! and love the mozaik-like card too!!!

Yezz, you definitely inherited your great sense of color from ur grandpa....

Beautiful work Brigette!!! Hope you had a great Christmas and have a happy new year!

ps. Your Grandpa was awesome!!! You definitely have his skills!

hey. these look super. your grandpappy had some good taste. i guess it's rubbed off onto you huh.

Have the best amazing happy new year ever!! Best wishes for 2009! Hugs!