I did these drawings last winter when I was in a certain European country for a couple weeks. They didn't actually use any of what I worked on while I was there, but they seemed pretty happy with it at the time. I did these with marker on this totally bizarre round paper that they had. I could've used photoshop, but they only had old crusty PC's (which I hate) and the keyboards are different in Europe (like the z and c keys are switched I think?? or something?) and all the keyboard short cuts were different too, and photoshop is just no good without shortcuts. So I went for markers and paper. Also, I don't really know how to use markers! Obviously! 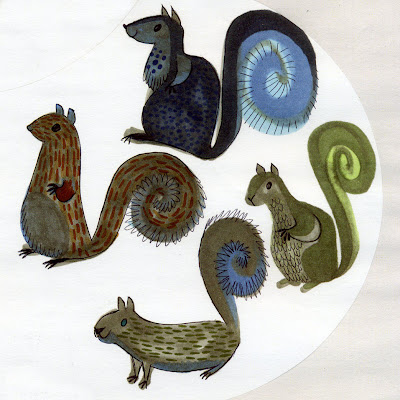 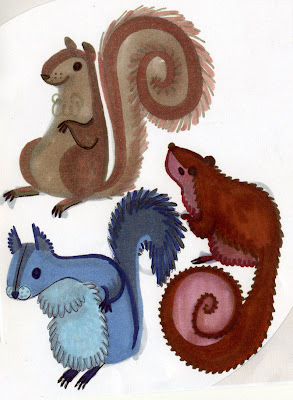 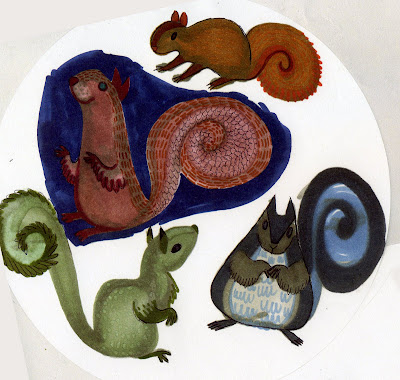 Sometimes you do a drawing and look back on it later and think "oh yuck", and I don't quite feel "oh yuck" about these...they're slightly above yuck. I may decide that they are yuck later but I'm strapped for blog content right now. I fear that I will soon be posting pictures of my feet or something. 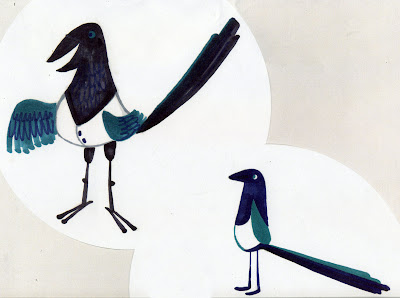 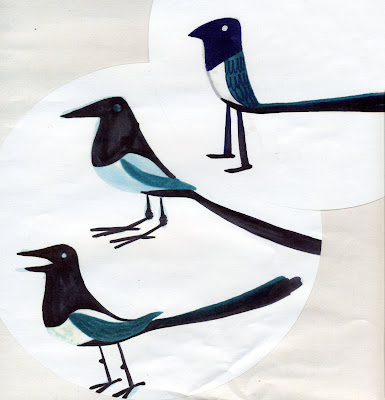 Anyway, they were fun to do. It was really liberating to just hang out and drink free cappuccinos from the fancy espresso machine in the office (Alpenmilch! Yum!) and mess around with markers, and then go eat a pizza and watch Pippi Longstocking on TV. 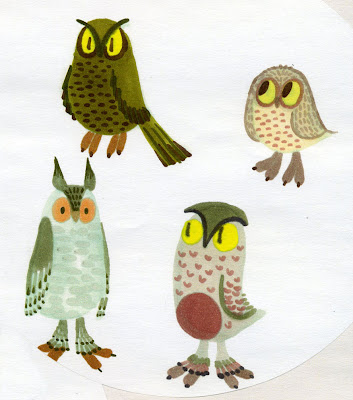 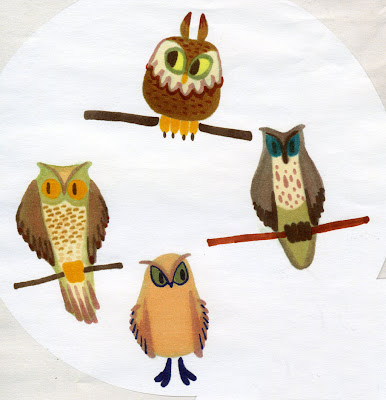 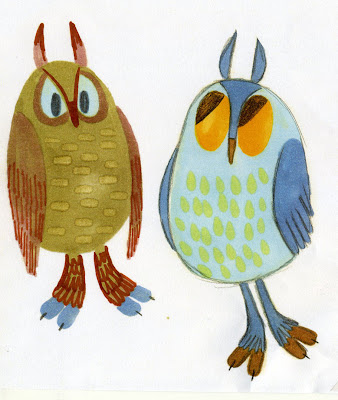 I promise not to lame out with only one post like I did last week. I had been doing so good posting twice weekly!

And last post was my 100th! I forgot to mention it at the time, but it kind of fills you with a feeling of accomplishment...even if it took over two years to make it to 100 and most posts are just a bunch of my gobbledy gook writing anyway.
Posted by brigette b at 6:39 PM
Email ThisBlogThis!Share to TwitterShare to FacebookShare to Pinterest
Labels: bird, blah blah blah, character designs, december, doodles, drawing, I am a genius, magpie, marker, owl, photoshop, sketches, squirrel, winter

For someone who claims to not know how to use markers - you did a great job. Awesome designs!

I think they are great, especially the owls for someone, who allegedly doesn't know how to use markers. ^__^

great marker drawings! love the medium! and squirrels are the bomb! - ellen @ artlife

You are so talented! Those are great!

I think those squirrels are the cutest thing, will they be available in your shop as prints? I love them!! Not yuck at all.

Really enjoy those owls.....but then again the whole blog has a nice collection of very cool gobbledy gook.

Owls are great! I love your illustrations and characters so much! Artworks on your portfolio blog are awesome.

man, circle paper would mess me UP.
you made good use of it, though.

Oh man these stole my heart.
Those squirrels are so dear!

I love owls too.
If I had a coat of arms it would definitely have and Owl on there oh and some keys and castle (like the Rook chess piece)
okay
I must go back and look at those squirrels again!

Thank you for posting

i love the colors on those last two owls, i'm a huge owl aficionado.

These are great!
I'm not kidding you've just drawn my 3 favorite critters: Squirrels, magpies and owls!