It's a sketch parade! Whoa!

Here's some miscellaneous character designs for my film. Everybody seems to respond to that first little boy a lot. Hmm. 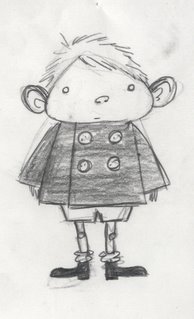 Library doodle. It's Lady Earl Grey, like the tea. I think I'll paint her up one of these days when I feel like procrastinating some important Critical Studies paper, like I'm doing right now. 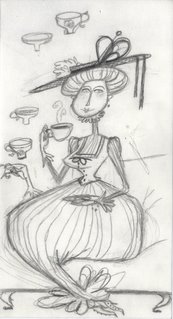 And las but not least, here's Bert. Good old Bert. His reaction to this drawing was, "Do I really look that mean??" 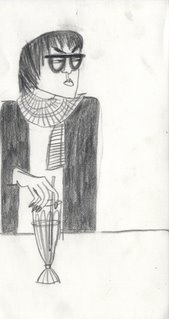 Thanks a bunch to everybody who leaves me comments! It's really hard to know if anybody is actually looking at this stuff, and I know that not everyone who looks will comment, but it's encouraging just the same! Thanks guys!

More character designs later, and hopefully some color stuff too.
Posted by brigette b at 1:29 PM
Email ThisBlogThis!Share to TwitterShare to FacebookShare to Pinterest

I love these! Thanks for posting.

There's some crrrazy great design work coming out of CalArts... including yours Brigette. Keep up the good work!

you are right, first thing I said is how cute the little boy drawing is!

Seriously, that kid has personality. The bert is great too, that scarf HAD to be documented, so thanks for taking care of it for us.

god, this is beautiful...Lovely shapes and character designs...I really like the third little girl to the right

You know which one i like! The GIRL WITH THE BOW!

Brigette! :D
I love these designs and I'm excited about your new filmmm. No duck?