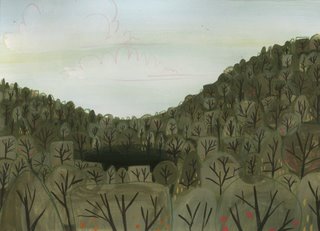 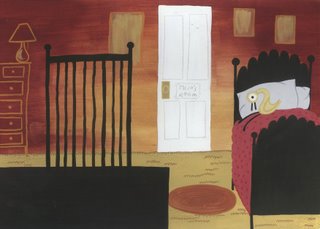 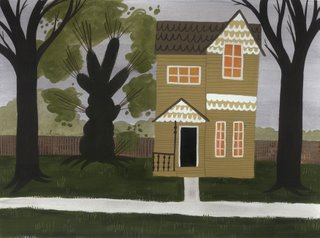 That's the last of them. I still like these backgrounds, even though they look like a big, naive color explosion to me now. I was really excited about painting, what can I say. They were fun to make, since I was kinda trying to paint like a little kid (very hard after spending so many years trying NOT to draw like a six year old). Hopefully, I'll have some character designs up soon, and some bg's from this year's film. I don't want to give to much away, but I'll definitly put some sneak peaks. I'm still trying to think of an appropriate title...I think "Captain Scratchy Beard" is the working title, if that tells you anything.

Now for a tea party at Ed's house!
Posted by brigette b at 10:16 PM
Email ThisBlogThis!Share to TwitterShare to FacebookShare to Pinterest


how are they a colour explosion?

Did you like the tea? Awesome backgrounds by the way. Remember? You inspired me to paint my bgs too! Hurray for gouache!

These backgrounds are beautiful! I'm so glad we're friends. Keep up the good work!

Hey, these look really nice and good. I still don't understand how to use paint, damn! Good job, horray

Awesome stuff here brigette!!! I really like the vampire skateboarder:)

Brigette! I like your backgrounds so much. I mean like they changed my life when I saw them in the open show last year. They've changed the way I understand the nature of backgrounds, and I'm not even joking. Please continue to be great.

Adrian (the other white mexican)