It's October! I bring you a spooky fairy flapper: 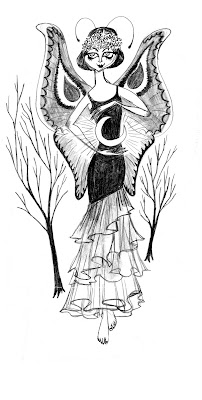 It's hard to update the old blog consistently when I'm drawing all the time but not for myself. I'm trying to draw more just for funsies but I tend to just go back to the same stuff over and over, like flappers. I could draw flappers til the sun goes down. Maybe I should take requests to mix it up a little. SUGGESTIONS??

I must note that it incredible that I have so many blog followers when I've been so awful at updating. Thanks all you followers!

In other news, I've had to shut down my etsy shop for good. It was becoming very time consuming, and although that's good because it means the shop was overall successful, it can become a big cluster f*$% when you have deadlines for multiple projects whizzing by and also a life. I find that I'm a much more peaceful individual when I'm not packaging orders and responding to e-mails from people asking where their stuff is, and traipsing off to the post office alllll the time.


The Twelve Dancing Princesses is due out in February! You can pre-order it on Amazon.com, but there's no image, so you still can't see what it looks like! Isn't that weird? Who would do that??
Posted by brigette b at 11:40 PM
Email ThisBlogThis!Share to TwitterShare to FacebookShare to Pinterest
Labels: 20s, 30s, butterfly, flappers, halloween, moth, spooky, trees

Congrats on the book coming out!
Too bad about your store (I wish I had such a problem!)
And how about trying some 80's kids. Like in the movie "200 cigarettes"! That would be different, and I think kinda fun.

Maybe you should do a set of working women from different eras! Like, for the 40's 50's, a Rosie Riveter kind of thing, a skate waitress from a drive in, or something like that!

Also, since I love your animals, maybe a woman wearing a living fur coat, haha!

I didn't see if you were going to be at APE this year, but I am enjoying the pigeon print I got from you last year. I framed it and put it over my desk!

Your portfolio is so great ! The artwork is top-notch !!!

Would it be alright if I put a link on my page?

your images are always so cute... maybe draw some grotesque monsters in honor of halloween?