This is my piece for the Spoke Art Gallery's Bad Dads show, opening this weekend in San Francisco!  Wish I could be there.  I wish it would get cold in Los Angeles already, too.  I bet it's fall in San Francisco right now, and I bet it's super nice.

The hardest part was getting likenesses for all the characters.  I do not consider myself very hand with caricature, so there were LOTS of super ugly, generic looking versions of everybody before I got to anything useful.  I think my favorite in the end is Royal.  Or Dudley.  Dudley was the only one I had no trouble drawing at all, strangely! 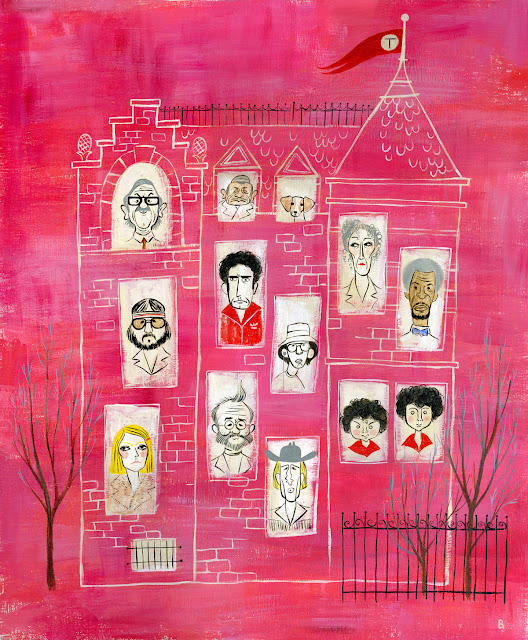 I should accompany this painting with this fact: when I first saw this movie, I did not like it.  Nope.  I exited the theater thinking "What one EARTH was it that I just saw??"  I didn't understand the dryness of the tone, or what the story was supposed to mean, or anything about it really.  I understood that it looked really cool.

Post art school I gave it another try.  It IS one of my husbands favorite movies, and I usually trust his opinion when it comes to films (with the exception of his insatiable desire to watch old and obscure horror movies, which are usually indescribably, irredeemably  terrible).

The second time around, it was like a lightbulb had been turned on in my brain.  After watching butt loads of movies and films in college, I finally had some context for the type of storytelling that Wes Anderson is going for.  Basically, I get it now!  But I also get why some people are still like "I don't like his movies".  They're the kind of movies that deserve investigation: you can watch them over and over and every time you do, you notice new things and make new connections.  They're very rich with content but they definitely don't give it up for free.  You have to spend time with them.  You probably have a buddy or two like that...at first, to a stranger, they seem unapproachable, and you find yourself saying "he's super cool once you get to know him."

(pssst I already put it on tumblr for you)

Knock my socks off!

Oh! this exhibit is across the street from me! I'll go and check out your piece for you! Also, yes fall has officially arrived here.

I love your personal work!
and your bill murray is great :)

Brigette! Please make a prints of this so I can buy it! :D

please make a print of this, it's gorgeous! i would love to own one. <3 beautiful work.

I saw this at the exhibit and absolutely fell in love. Sadly I am a poor post-grad student or else I would have snapped it up. Beautiful beautiful work.